About the GRADE SCHOOL Department

The Grade School Department occupies a wing of the whole structure which was built in 1966. It has its own facilities like the library, two IMC rooms, Science Laboratory, H.E. Room, Guidance Office, two Computer Room, HELE Room, Music Room, and Medical Clinic. Some facilities are shared with the other departments.

In the beginning, San Sebastian College-Recoletos catered to boys exclusively.

Later, in 1973, due to numerous requests abetted partly by neighbor schools that phased out their grade school, the department opened its environment to girls. Since then, SSC has become co-educational.

There is information to be gained from data. Tests in schools can be informative. Scores of students provide a quick glimpse of the current state of education. Thus, it is useful to have these numbers. Test results allow for a useful perspective. The National Achievement Test (NAT) administered by the Department of Education (DepEd), addresses the major subjects taught in school such as Science, Math, English, Filipino and Social Studies. The scores in these exams are reported as percentage of items correctly answered. A mean percentage score (MPS) of 75 percent is currently set as the goal of the DepEd.

The grade school department upholds the passion for excellence as it takes pride for a consistent top performance in the NAT. The strong foundation through Catholic Christian Education provided by the school speaks of the outstanding performance of the Grade 6 pupils from 2010 until 2015 which is the last batch of NAT.

The Grade School Department earns the respect and recognition as DepEd announces the following ranking:

Laying the Groundwork (1972)
The idea of seeking accreditation was ventilated in the academic meetings by the Rev. Fr. Jose Antonio Calvo, OAR, the then Father President. But there were odds to surmount and at that time it seemed to be an impossible dream. This provided an impetus for the Administration to redirect its efforts particularly in policy formulation and implementation and in the improvement and enrichment of its programs. Not even the declaration of Martial Law diminished the desire of the Sebastinian community to aim for greater heights.

The First Filipino President Takes Up the Torch

A significant event in the history of San Sebastian College (SSC) occurred during the election of its first Filipino President, Rev. Fr. EmeterioBuñao, OAR.  Barely a few months of his administration in the first semester of SY 1980-1981, Fr. Buñao unequivocally stated that one of his major thrust was to seek accreditation for the school.

On September 5, 1980, SSC invited representatives of PAASCU to an orientation meeting.  The resource persons discussed the meaning, process and merits of the accreditation exercise.  No less than the PAASCU President, Dr. Felixberto Sta. Maria and the Chairman of the Tertiary Commission, Sr. Soledad Hilado, briefed the administrators, faculty and the non-academic staff.

Rev. Fr. President Buñao formally communicated the desire of the school to seek accreditation on March 18, 1981 in a letter to Dr. Felixberto Sta. Maria, PAASCU President.  Barely a week later, acknowledgement from PAASCU signaled the start of the self-survey.  The working committees were reminded that the overall target date should coincide with the then President term, which was SY 1982-1983.

Through retiring into oneself, St. Augustine came to a deeper awareness or consciousness both of himself and the mystery of God (interiority).  Inspired by this tenet, the self-survey of the Elementary Department of San Sebastian College went full swing in November 1981.

A seminar on Curriculum Development with Dr. Jesus Palma and the Ateneo group was held on November 27 and 28, 1981.  This paved the way to the preparation of the scope and sequence and the Academic Budget Plantilla from December 1981 to May 1982. 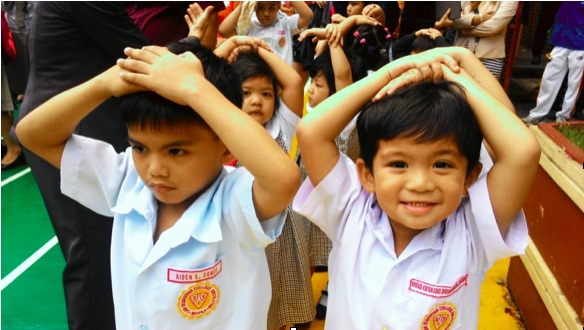 More seminars and workshops for administrators and teachers were held in the summer of 1982.  On May 31, 1982, a formal letter sent to PAASCU as regards the pre-survey schedule of the Elementary Department.  The actual work of the analysis and evaluation committees began henceforth.

The Elementary Department of San Sebastian College had the Preliminary Survey on December 6, 7 and 8, 1982.  The PAASCU report which was received in March 1983, showed that the Department was given two years to work on the recommendations and to prepare for the Formal Survey.

The preparations for the Formal Survey started right after the Department received the result of the Preliminary Survey in March 1983.  Determined to earn the stamp of approval from a reputable accrediting institution, the Department embarked on a thorough study and implementation of the recommendations given during the preliminary visit.  The formal survey visit was held on August 6-8, 1985. Eventually, PAASCU granted Level 1 accredited status for three (3) years to the Department.  This achievement inspired the administrators, faculty, student and parents to continually work toward achieving great heights in the coming years.

bigstockResurvey Visits: A Reaffirmation of Quality Standards through a Level II Reaccredited Status: (1988-2009)

The first resurvey was considered as another major milestone in the accreditation history of the school.  There was no stopping the Department as it earned clean reaccredited status for five years, visit after visit.  This accomplishment attested to the fact that the Department has been meeting the  high standards PAASCU had set for educational institutions which are aspiring recognition for their effort toward achieving academic excellence.

Continually driven by its passion for excellence, the Department does not sit on its laurels for too long so to speak.  It grabs every opportunity for growth and development that comes its way.  With this guiding principle, the Department has embarked on another journey leading to PAASCU Level III accredited status.

It seems like traversing through uncharted waters, but with the help of supportive administrators, dedicated and cooperative academic and non-academic personnel, parents, students, alumni and other stake holders, we look forward to seeing our beloved school earning the respect and recognition it truly deserves with a Level III stamp of approval from PAASCU.